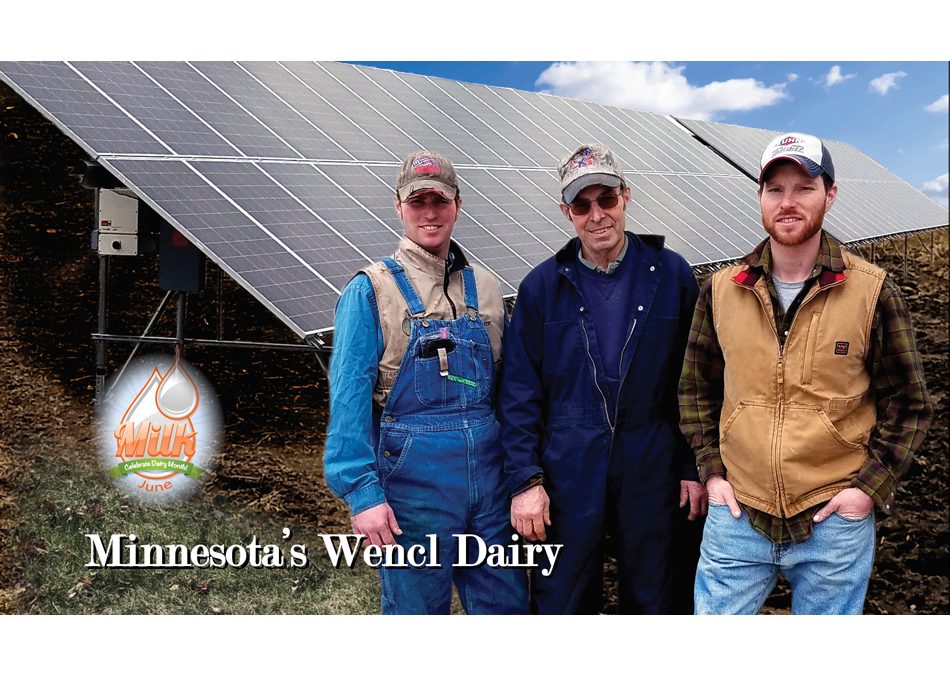 Farming for decades, Tom and Karen Wencl, on their Blooming Prairie, Minnesota, organic dairy farm, in 2012, launched the transition process of integrating their sons, Wayne and Chris, into the operation as partners.

“We operate as an LLC, where the sons are taking some ownership in the business,” Tom explained.

Before the Wencls’ sons went to college, they saw benefits of them amassing more knowledge before working into the operation, and Chris and Wayne earned degrees. Tom told them, “If you still want to farm when you graduate, then we both learn something. If you’ve got that degree, then you’ve got some options.

“So, we grew gradually,” Tom said. They now milk about 150 head. “You can’t milk 40 cows and support three families. It just isn’t there.”

Organic milk pay prices have worked in the Wencls’ favor for the family farm, as well. “We’ve been with Organic Valley since 2002. That’s been a real success story for a lot of farms across the country,” Tom said. To continue farming, and to partner with Wayne and Chris, obtaining organic certification was the most logical path.

“We’d farmed a lot like that anyway. It wasn’t a huge jump.” Tom said. His dad was helping in the 1990s, and was supportive.

Family line benefits rise to the top. “It’s interesting because, my son, Wayne, and his wife, Linnea, who works at local veterinarian clinic, have three children, 11, 8 and 6 years,” Tom said. “So, the grandchildren aren’t far away from us. When you stop and think about it, it’s amazing to be able to carry on some of the things you grew up with.”

Tom and Karen also have a daughter, Jenny, who teaches at an American international school in Nigeria. As of April, she was back in Minnesota because of the COVID-19 pandemic.

Each family member specializes in an area of the operation, too. Karen handles all things calf-care. “That’s her department,” Tom said. “Wayne does most of the milking. I push cows, scrape stalls and help him with herd milking.” Chris also serves as the pasture manager.

“While we’re doing that, Chris is mixing TMR and feeding,” Tom said. Wayne, Chris and Tom share the field work – in between milking times and cow work. Also, they sometimes have part-time milking help, and hired hands at harvest season. The labor needs vary, as do the solutions.

“For Wencls, it is all about family and working together as a family unit,” said Roger Nelson, National Farmers field representative. “It’s what happens when everyone works well at a different chore on the farm; all the work gets done in a timely manner.”

The Wencls rarely have quality concerns, and if a question does come up, Wayne is on top of it and working to correct it right away, Nelson said. Operating on a Century Farm, it’s that kind of tenacity and attention to detail that has contributed to the operation’s longevity.

The Wencl milking herd is predominantly Holstein, with a few crossbreeds. They have two Brown Swiss in the herd, which is often done to increase components.

“Our Holsteins run a 4.1 test, so that’s a big deal with the milkfat test,” Tom said. “I’m pleased with that for a Holstein. Components are a big deal anymore.”

The Wencls have help monitoring components and milk quality from Nelson. As Organic Valley’s Milk handler in the Midwest and Northeast, National Farmers provides field service to OV member farms.

“Roger Nelson has a keen eye on quality and Roger’s first rate. We’re lucky to have him,” Tom said. “Roger’s good with milk quality questions and that sort of thing. He’s watching numbers on our tests. He’ll know [about a problem] before we know it, and let us know we need to start looking,” Tom added.

The Wencls farm on 475 acres, cropland and pastureland, growing about 120 acres of corn, 120 acres of alfalfa, dedicating about 140 acres to pasture and 112 acres to summer annual forages. “It’s a rotation crop, so that works well,” Tom said. In a normal year, Wencls purchase 10 percent to 20 percent of their feed, but this year, because of the 2019 crop season, it’s closer to 40 percent.

Fortunately, on the Wencl farm, the family has enjoyed help from National Farmers professionals finding the needed certified organic grain. Mike Schulist, NForganics program manager, and Tim Ennis, former NForganics manager and current marketing specialist, find the Wencls what they need when they’re in the market for a grain or crop.

“We’ve had a good relationship,” Tom said. “If it looks like we’re going to need something, we can get them looking. We can get out ahead of it. They’re good about putting things together for us.”

Like their dairy farming counterparts across the country, keeping their herd in top condition matters greatly to the Wencls. The quality feed they raise, and sometimes purchase, helps in this area.

Their membership in a farm business management system gives them some insight into how they’re doing, using farm comparisons as a benchmark. “The herd health part of it is actually interesting; our vet costs are down considerably compared to other farms like us,” Tom said. They appreciate assistance from Organic Valley, Crystal Creek and Blooming Prairie Veterinary Clinic. “As far as animal health, it’s not any harder than it was in the conventional world, we don’t think,” Tom said.