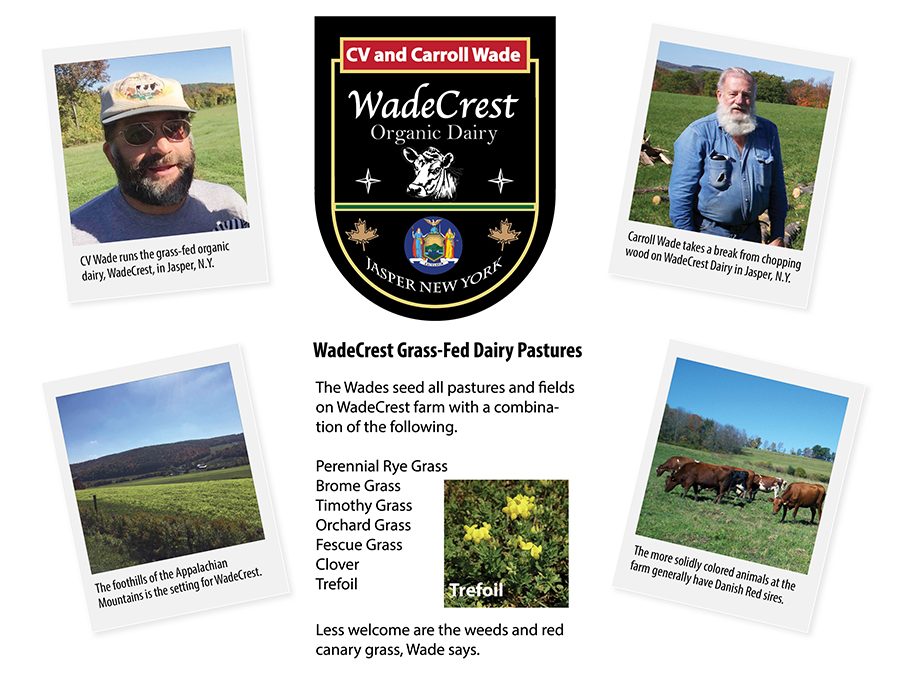 In New York’s foothills of the Appalachian Mountains and at the headwaters of the Chesapeake Bay watershed, lies farm country, the small community of Jasper, the more industrial town of Corning and WadeCrest, the dairy operation of Carroll, Carrie Sue and their son, CV Wade.

In 1998, CV took over the dairy farm, spearheading the dairy livestock aspect, and at 73, Carroll handles most of the field work, and the bookkeeping. Milking 25 cows, with about 35 on the farm at any given time, the rolling herd average is about 11,000 pounds with once-a-day milking and a grain-free diet. Butterfat levels range from 4.3 to 5.2 and protein levels are about 3.6

WadeCrest consists of about 600 acres of rolling hills. About 340 acres of the farm is dense forest, and the rest is either pasture or crop land. In addition, they rent another 97 acres.

Diverse ag income sources and frugality are important strengths for the family farm. The Wades appreciate timber harvests and off-farm employment. Carroll’s wife, and CV’s mother, Carrie Sue, a retired registered nurse, manages the home, gardens and flock of chickens. CV said it’s very important to note that her income and contributions through the years helped sustain the farm operation.

The Wades had their reasons for transitioning their dairy farm to a grass-fed operation. “Regular organic and feeding grain came with that pesky grain bill. Our land isn’t great for growing grain economically, so it was always necessary to buy the grain we needed. At the time, we were running an RHA of nearly 25,000 pounds. Our vet bill was still more than it should have been, and we were spending close to $100,000 a year on grain,” CV said. “That bill was destroying any financial gain that being certified organic offered.”

“Our first year of zero grain, we eliminated all but about $10,000 of that grain bill, because we still have to buy approved mineral supplements and probiotics for the herd.” WadeCrest gross milk sales decreased by about $52,000 dollars. But the math worked. “Right off the bat, we had around $37,000 of extra revenue to work with, without adding cows on,” CV explained.

Running the numbers on the net income side, at the time WadeCrest transitioned, that meant a profit of $15,000 to $20,000 from 35 cows, at a time when even most organic farmers were just breaking even. Organic Valley was paying a $4 premium for grass-fed milk at the time, so the Wades enjoyed a pay price of about $38/cwt. to $43/cwt.

“Admittedly, the shift to zero grain did effectively kill our cash flow; we became a cash-only operation, with all the benefits and complications that entails,” CV said. During the last three years, market pay prices have decreased by $9/cwt. to $11/cwt. dollars, which has presented a financial hurdle. Still, the Wades aren’t immersed in debt from grain bills, or anything else.

“We’ve also nearly eliminated our vet bills, the cows are staying much healthier, are generally much less stressed, and are breeding far better than when on a grain diet. And, with once-a-day milking, they hold their body condition beautifully,” CV said.

“With OAD milking, the cows hold their flesh very well whether on grass or being fed baleage and hay after grazing season ends,” CV said. CV dries off the cows at least 75 days out from calving to provide the weight gain necessary or when lactation begins again. “OAD comes with the added benefit of having more time to devote to other things around the farm,” he said.

Wade suggested certain farm types and individuals that make a good match for a grass-fed operation. “A system like this is for the folks out there who have moderate to marginal land that is best suited to grass production,” CV said. “It’s also for the breeder who wishes to focus on type and components in their program, rather than maximizing production. And for the farmers who wish to stay under that 100-cow level.”  Being a “do-it-yourself” farmer who doesn’t want employees can also implement a grass-fed system successfully.

Grass-fed certification protocol is much more strict than regular organic. New rules and guidelines are being implemented frequently as the market grows. “And it is a true growth sector of dairy, the exception right now. The certifiers and OV are rigid and strict in their diligent execution of these rules and standards, which are constantly evolving,” he said.

Anyone thinking about embarking on the “grass-fed adventure” needs to understand some realities about major differences in what cows perform well and don’t, and perceptions of lending institutions. The 100-plus pounds per day cows are not going to do well, but cows that produce 45-50 pounds excel. Cashflow becomes much different as well, because lending institutions, well, they like to lend, and the understanding of grass-fed and operations like the Wades’ isn’t deeply rooted.

“You’re also going to face challenges in getting enough vitamins and minerals and probiotics in to the cows,” CV said. “Building up the soils is key; make every effort to source the herd’s micronutrients through their forage to minimize the supplements needed.”

At WadeCrest, all the pastures and fields are seeded to some combination of perennial rye grass, brome grass, timothy, orchard grass, fescue, clovers and trefoils. Of course, there’s all the plant life that volunteers to be there on its own, too.