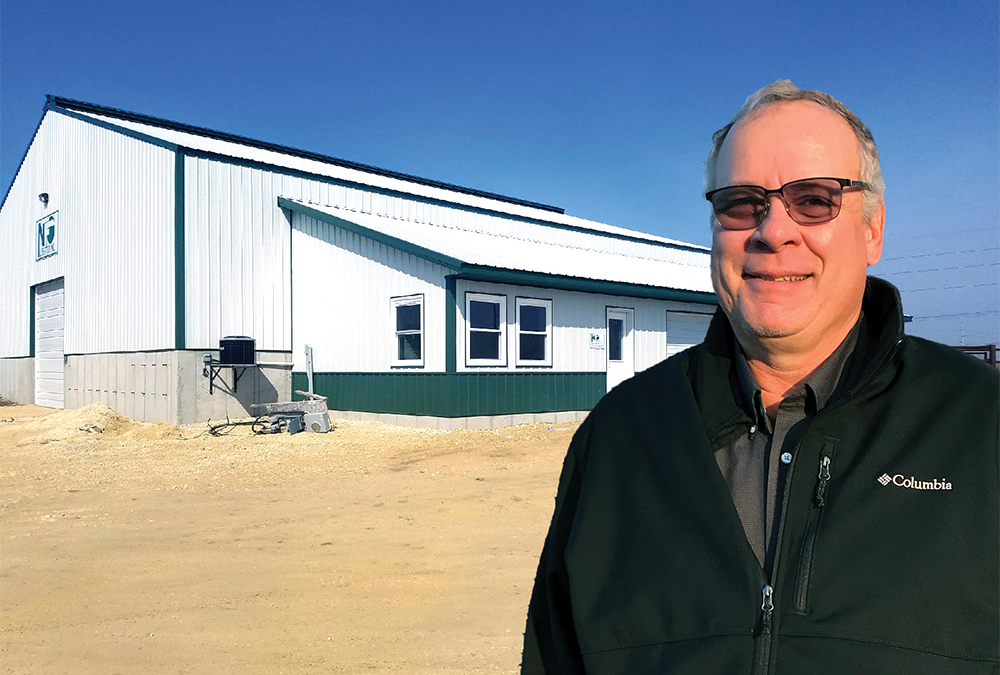 As more dairymen in the area near Farley exited milk production, and with land remaining very expensive, these farmers retained equity to move into cattle feeding. “People went from feeding 50 to 150 dairy cows, to feeding 300 to 1,500 cattle, and they need help marketing those cattle, because contracting is new to them, and we’re in the area doing it,” Riniker says.

Banks see the value in what National Farmers’ Nexus risk management services provide, as well. “They’re promoting trying to eliminate risk,” Riniker says, and as lenders promote risk management in the cattle business, they’re putting the National Farmers name and the Farley marketing center with that. “We have a good track record, and that’s why we have repeat customers,” Riniker says.

The presence of ethanol plants, cattle feeding moving to the Midwest and the popularity of total mixed ration implements to use home-grown feeds, all add to the potential, he suggests. National Farmers is already spread throughout the Midwest from Minnesota and Iowa to Ohio, where cattle feeding is growing, giving National Farmers a location advantage. “I strongly believe the cattle numbers could grow with the right folks on staff and the right locations,” he emphasizes.

Riniker, who farms near Greeley, Iowa, finishes 1,500 head of Holstein steers a year. He works with National Farmers Livestock Representative Tom Green to purchase 300-lb. calves in groups of 150 for his operation. “He does a very good job, checking health status, and monitoring the growers who raise those calves to 300 lbs.,” Riniker explains. “And Tom raises three pens a year for me, which is about 450 head of his own, so he knows calves as well as anyone I know. He’s a real asset to the organization.”

Riniker works with Jeff Rose, cattle risk manager, and Pat Lampert, livestock director, on contracts. “We set target prices off the board, usually on basis contracts. I work with them both on picking a price that is possible,” he says. So, Riniker’s vision for National Farmers’ future in the cattle marketing and risk management business is one based on his own successful experience with what National Farmers gives cattle producers.

Riniker’s practices on the production side meet high standards. When calves come onto the operation, Riniker houses them in a grower building until they reach 600 lbs. Then, with the help of employees, he moves them into the finishing building until they reach about 1,450 lbs., and they go to market. Riniker aims for a carcass of 825 lbs. to 900 lbs. No stranger to quality, 90 percent of the beef from his operation grades at choice and prime. They change bedding twice weekly, monitoring health from head to tail as the cattle are moved in and out of buildings. He runs a full vaccination program and feeds his animals the best rations possible.

Riniker grows 460 acres of corn and 100 acres of hay, retaining the crops for his livestock operations. He also finishes 50 colored calves per year, centering that operation around 100 acres of rented pasture. He bought the colored cows after a 2012 barn fire instigated selling the dairy herd belonging to him and his wife, Janet.

Owning and operating a custom bagging business, Riniker sees the benefits of retaining feed quality for his livestock operation, and customers’ operations, through starting with the right ration, then properly storing it. “I use innoculents on the feed during the chopping process,” Riniker says. “That extends bunk life and aids in fermentation.”

Typically, the average finishing ration is 2 lbs. hay and one-third each of earlage and high moisture corn, and 50% moisture distillers grains, he explains. It’s palatable to the cattle, so they consume it heartily.

Referring to quality production on the part of cattle producers as a whole, Riniker says, “We’re professionals out here doing a professional job.”