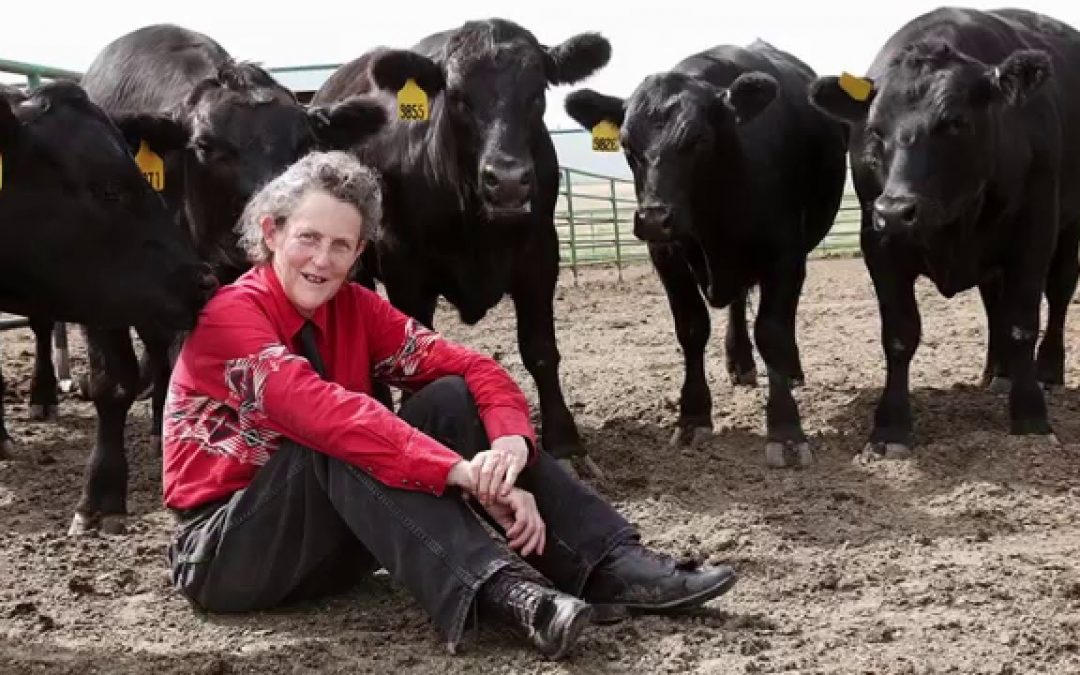 National Farmers members formed lines around Grandin’s book table, enjoying the presence of the animal agriculture (and autism awareness) celebrity. Grandin greeted members and workshop attendees at National Farmers Convene ’19, and autographed books for farmers and ranchers from around the country. The book table was stacked with titles such as “Temple Grandin’s Guide to Working with Farm Animals,” “Animals in Translation,” “Humane Livestock Handling,” “Livestock Handling and Transport,” and many titles related to her work and perspectives about autism and autism awareness, the brain and how people think.

When it comes to people running a cattle operation, variety is an ingredient for success. “Different kinds of minds complement each other. So, you have a good operations person to run your feed yard and somebody good with the futures market to handle that part of it,” she said.

In Grandin’s straightforward presentation style, she reminded members and workshop attendees about staying calm around cattle, watching vigilantly, and, recognizing pooping as a measurement of fear in cattle. It’s called defecation scoring. The bathroom matter wasn’t the center of Grandin’s talk, but, it is a sign of fear, along with a cow’s head being up with alert ears, ears back, tail switching and white eyes. Watching for all of these signs, and responding with a calm demeanor makes a smoother cattle handling process, because it takes 20 to 30 minutes to calm an agitated bovine.

“Calm animals are easier to handle,” Grandin said. “One of the real bright spots the last few years is, stockmanship’s improved.” All the work the cattle associations have done for stockmanship training is helping. “People are really starting to get serious about it,” Grandin said.

When it comes to cattle flow in chutes and through a facility, the animals are easily distracted, whether it’s a car parked too close, a paper cup on the ground, a jacket on a fence or a loose chain hanging down. “Animals will show you what they don’t like in your facility,” Grandin said. “They’ll come right up and stop.”

The direction a facility faces matters, too. Cattle don’t want to be herded into the sun if it’s hitting them in their eyes. “Well you all know how horrible it is to be out on the highway and go straight into the sun. Get down in your facility and see what your animals are seeing,” she said. She said non-slip flooring is essential, because animals panic when they slip.

Good handling also involves more walking around on the part of the handlers, and moving cattle in small groups. Respecting cattle’s flight zone, or basically, their personal space, is also important when considering how many head to put into a pen, or moving in a pen or elsewhere with the animals. The flight zone is the minimum space an animal tries to keep between itself and anything it thinks is a threat.

Grandin reviewed aspects of cattle barns, facilities and loading areas that worked well, and did not, and said her designs are based on two overall concepts. She has designs that are very simple and inexpensive to put in place, which require more skilled stockmanship. Other designs are not as simple, and she may be able to train someone in 30 minutes how to move animals through them, because it requires a lower level of stockmanship skills. Those designs are typically more of a financial investment.

Grandin pointed out that for 20 years, the cattle industry has been selecting genetics for temperament, and listed the core emotions of bovine.
—Fear, primitive emotion for survival, as in cattle acting agitated in a chute
—Rage, anger
—Panic, separation anxiety, when a calf is separated from its mother
—Seeking, approach novelty, grazing interest differences in cattle
—Additional emotions, lust, caring, as in a mother licking a calf, play

There is a point where you can over-select for temperament, Grandin said. It can result in a sacrifice of other good qualities. “You want animals that will mother. You want animals that will get out and graze. “There is a basic principle in genetics that when you over-select for a trait, you wreck your animal. Period. It doesn’t matter if it’s a behavior trait, if it’s a production trait or a performance trait, like in a race horse. Select for run, run, run, then they’re breaking their legs….We’ve got to start looking at a more balanced approach on a lot of genetic selection and that fortunately is starting to be done now.”

If you want to understand animals, Grandin said, think visually and not with words. “It’s a sensory-based world, not a word-based world,” she said.