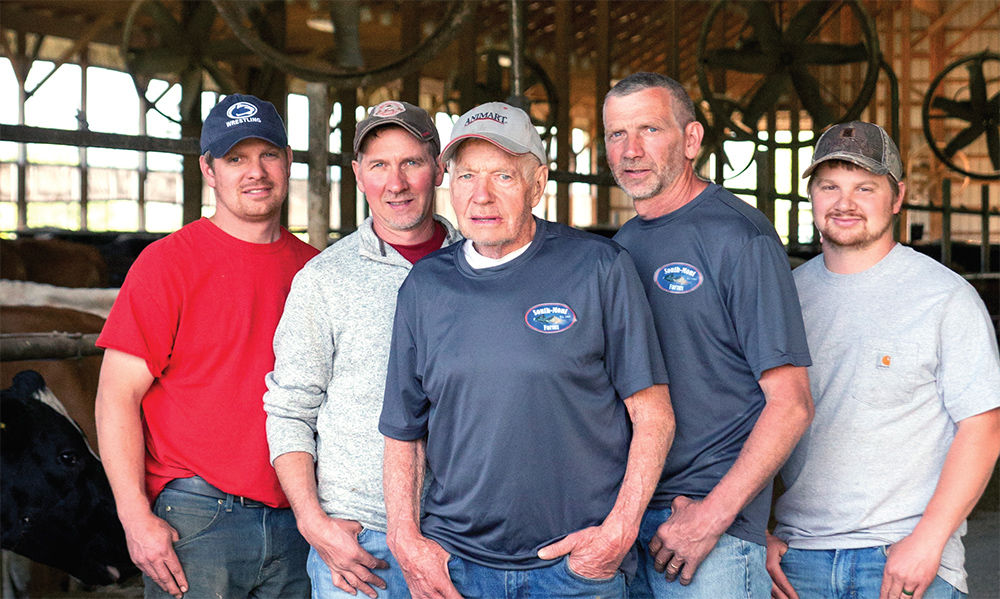 On South-Mont Farms, nestled into the hills of eastern Pennsylvania, the Shedden family farmers tend to a 375-head milking herd that’s two-thirds Holstein cows and one-third Jersey. A decision based on the farm’s facility, when the milk check arrives, the blend of dairy breeds also rewards the Sheddens in component premiums and healthy production level payoffs. Scott Shedden, sons Mark and Bryan, and Mark’s sons, Lance and Eric farm together.

The Sheddens purchased Jerseys to accommodate their secondary tie-stall barn, as those particular tie stalls are smaller, a good fit for the Jersey frame. Today, the producers milk cows and house cows in different buildings, but the Jerseys remain. (See the dairy expansion story sidebar.) Eric explained the benefits of the combination of dairy cows. “We see a little increase on our components on the milk check,” he says. “It usually runs around 4 percent butterfat and 3.2 protein.

An all-Jersey herd, could be a lot higher, but we have a fairly high Holstein production, so that helps keep production volume up.”They like Jerseys for other reasons that come down to dollars and cents, too. “Jerseys have a lot better longevity. Reproduction has a slight advantage over the Holsteins,” Eric adds. “We’ve also found in the past few years since we haven’t been expanding, there seems to be more of a Jersey heifer market than Holstein heifer market.” 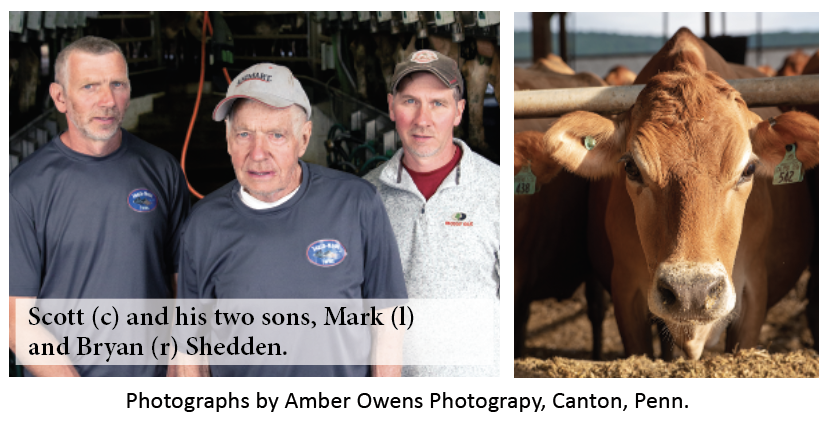 The Sheddens implement practices and use technology on South-Mont Farms to promote milk quality, cow care and provide peace of mind. Bryan’s work in the parlor with the computerized systems and technology proves highly valuable and entirely necessary. The activity system tracks the milk cows for optimal breeding times and records milk weights daily through collars, and activity collars were recently added to their breeding heifers. “It’s going to really pay off, especially because we have a little less contact with the heifers than with the milking herd,” Lance says.

The buildings are cow-comfort friendly with side curtains, proper ventilation and sprinkler systems, so this prevents production declines in hotter summer months. And in the parlor, they just added an automated teat cleanser. When the user holds the trigger down, it releases a sanitizing solution and a brush runs on each teat, then it dries the teat.

The goal was more consistent milking practices. Then the milker post-dips. It eliminates paper towels and laundry, too.Mark handles the feeding program. “We feed in four different groups,” Mark says. “One group strictly is for Jerseys, then there’s a younger two-year old pen, then a fresh cow pen, with mixed Jerseys and Holsteins. And there’s a mature pen, which is not mixed.” 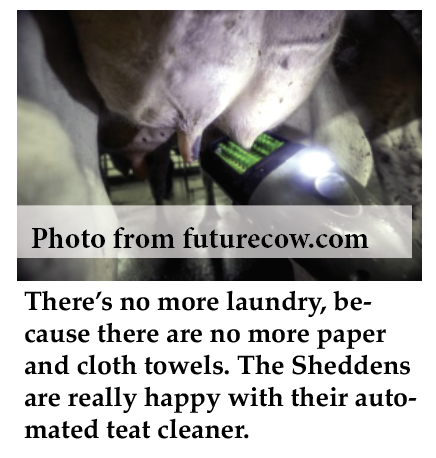 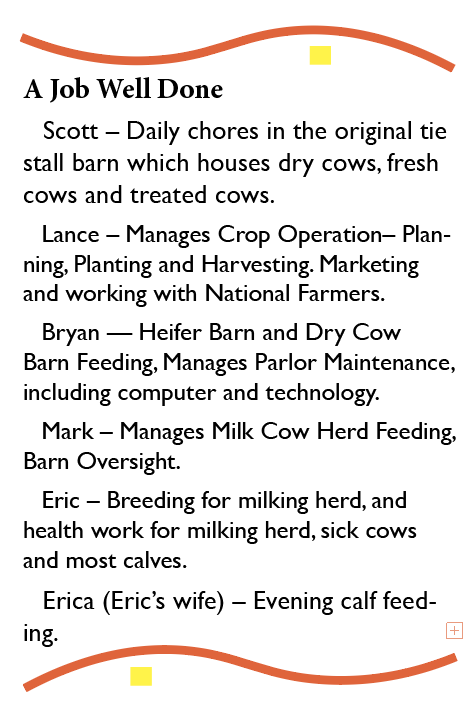 They feed three-fourths of the ration in corn silage, to most of the groups, and one-fourth grass haylage with some alfalfa. Add to that the concentrate minerals, soybean meal and high-moisture corn.For the mature cows, Mark balances the ration for 95 lbs. of milk. “We grow most all of our own crops, except we buy the high-moisture corn,” Mark explains. Additionally, the farm has looked to the expertise of the same nutritionist for a number of years, so he knows what they need. “We work well together,” Mark says. “Fresh cows freshen and we don’t have many problems. The big key is your dry cow program; if that’s alright then everything will go well from there.”

They’ve also focused toward growing more profitable with the breeding program. They started genomic testing with heifers, and are breeding lower heifers to beef cows. Overall, they tend to sell as bred heifers. Recently, they also worked with the Pennsylvania Holstein Association for an export opportunity for open heifers. There are nuances they are learning, but it’s working well for them.

Lance manages the Shedden crop operation, which encompasses about 800 acres, with 500 acres of corn, and the remainder in largely grass hay and some alfalfa hay. “We grow all of our forage needs,” Lance says. The family handles all of the planting and harvesting, so those times of year are game-on for everyone. They have manure custom applied. For 2020, they hope to have corn left over. The topography is such that many of their fields are three to four acres, which makes planting and harvesting more of a stop and start process than in the Midwest or Plains.

The farmers appreciate the relationship with their National Farmers representatives. They’ve worked with National Farmers on purchasing options through the UltraOptions program. “They have some good programs,” Lance says. “We need to utilize the risk management more.”For dedicated people like the Sheddens, who are well aware they hold an essential role in the world, the farming life is full of rewards. Mark enjoys working outdoors and with family. “It’s good, getting done with the day and knowing everything was done right,” he says. 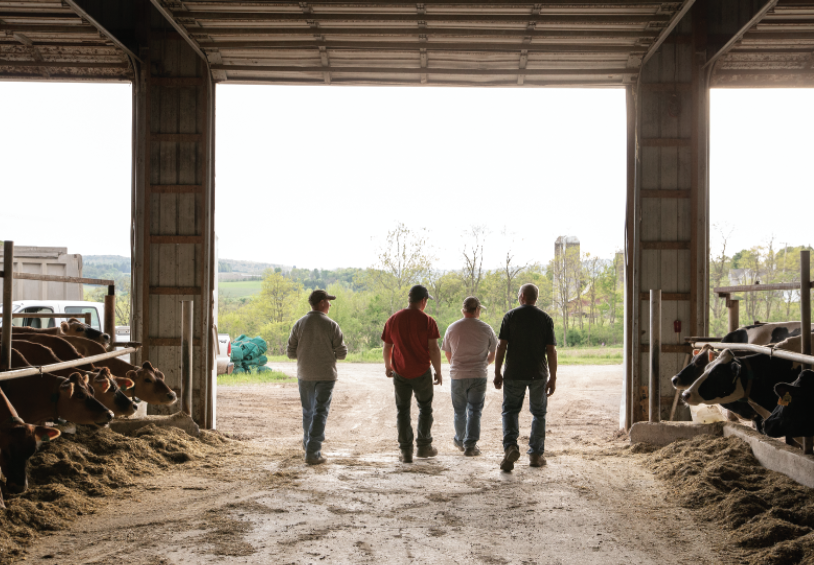 The Susquehanna River meanders through the hills of Bradford County, Pennsylvania, in the northeastern part of the state, the county where Scott and Elaine Shedden raised a family and started dairy farming, following in Scott’s family’s footsteps.Two of the couple’s children, farm with Scott there now, Mark and Bryan, with two of Mark’s kids, Lance and Eric.

The three-generation operation is the fifth generation of the family in agriculture there. Scott’s maternal grandfather started the farm, then his dad worked the farm for a while. The old dairy barn on the original place has an iron emblem on it that reads 1889, and M.M. Van Dyke, depicting the family name of Scott’s mother’s family.Mark and Bryan started farming with Scott right after high school. Roughly a century and a half after the Van Dykes, a new generation of producers intends to make a life in farming. But how did they get there?

Eric explained the growing process to put the dairy farm in a place to handle more family members. It started once Lance and Eric both finished college. At that point, they were milking 75 cows on the home farm. Then the Sheddens started renting another farm up the road, and added 40 cows, operating at that level for a few years.Then an opportunity arose with another neighboring farm that was only a mile the other way, and they had a modern free stall barn and parlor, Eric explained. 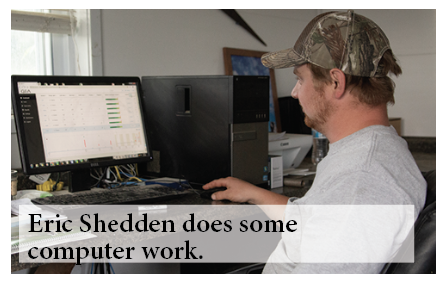 The Sheddens talked with him and were able to rent that barn and milk parlor and moved both tie stall barns up to that farm, increasing capacity to about 240 cows by the fourth year. At that point, they were talking about the situation, because the original lease with that farm had been for three years, Eric said. “We started talking about renewing the lease or buying the farm. We were trying to decide,” he said.

However, the farmers they were leasing from didn’t want to sell and wanted to get back into milking. So, the neighboring farmer gave the Sheddens enough time to build a new barn and parlor, which took about a year. They constructed it to hold around 375 head, so they went through another period when they were growing to fill up the barn from 240 cows to 375 cows.Elaine remembers the conversation about expanding. “There was paperwork spread over my dining room table,” she said. “I’ll never forget it.” Mark and Bryan looked at Eric and Lance. One of them asked, “Are you in this for the long haul?” They didn’t hesitate and together, they both said, yes,” Elaine says.“It’s rewarding,” Mark says. “They both went to college and came back and it’s worked well.”

Eric does more with the cows, and Lance is more on the crop side and the machinery. It’s good to have them at home and around all the time on the farm.” Eric agrees. “It is nice when we [brothers] are both working, Lance and I can get more accomplished together,” he says. Eric was set on coming back to the farm, expanding and having an updated facility with a milk parlor. After college, Lance got a job in the conservation district in their county. “I worked there for a little less than a year. The more I worked there, the more I wanted to come back here. I was visiting farms,” Lance says.

But that’s not the same as farming yourself. “At that point, about the same year, Eric came out of college. We started working back at the same time. It wasn’t long before we moved up to that free stall barn,” Lance said.Integrating another generation, two more thinkers, two more farmers has worked well for the Shedden family. “My dad and uncle right off the bat gave us a lot of freedom and gave us the reins, rather than having one person running the show,” Lance said.Bryan and Mark have worked together since they were just out of high school. Scott works on the farm, too, at 81. And there’s a lot of interaction between Scott, Mark and Bryan, Lance and Eric, as they run the dairy farm together. 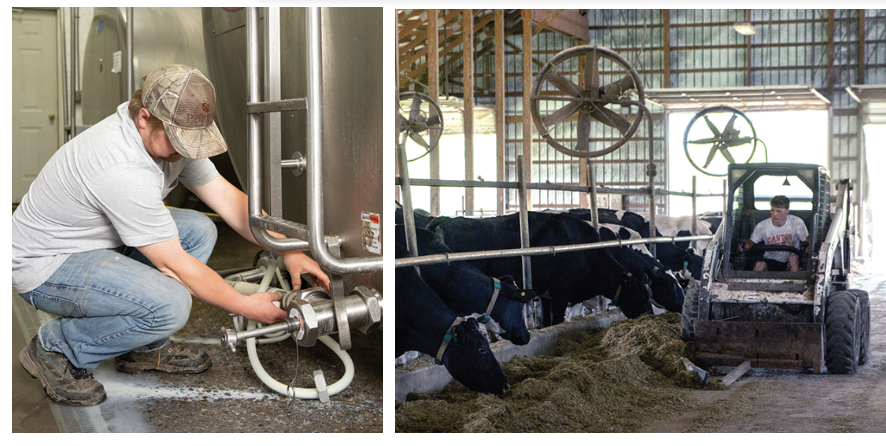