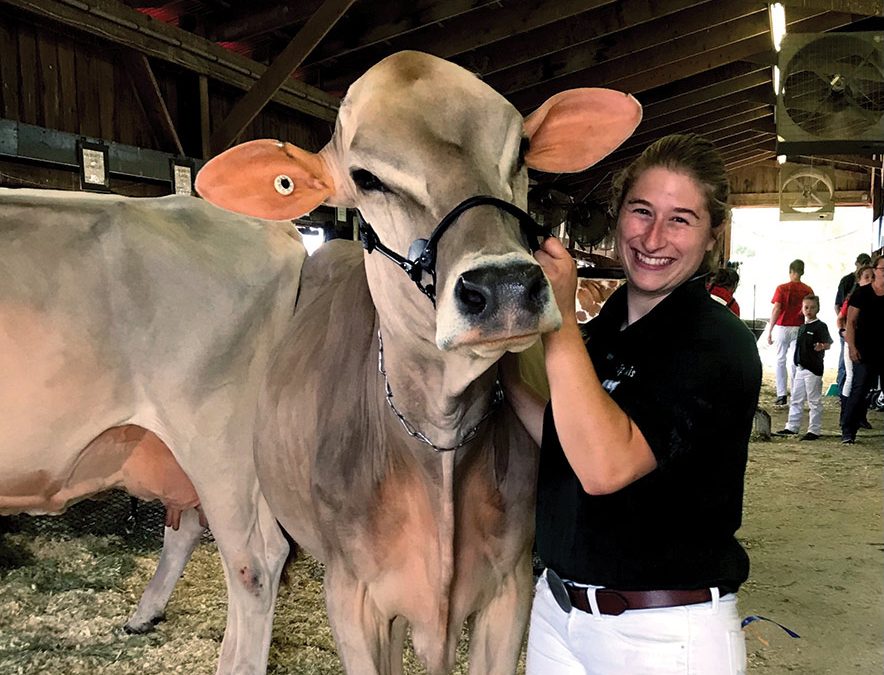 Shelby Biasini earned her dairy bona fides growing up on her family’s dairy farm in Morrisville, Vermont where they currently milk 40 head of registered Brown Swiss and Holsteins.

“In 2009, we started Mt. Mansfield Creamery where we make a number of raw milk European style cheeses which are aged a minimum of 60 days in our underground cheese caves,” Biasini said. Her family’s cheeses are marketed throughout New England, New York City and various wholesale avenues.

During her formative years, Biasini was a member of the Green Mountain Moovers 4-H dairy club for 11 years where she earned a spot on the Vermont Dairy Quiz Bowl team and went on to compete at nationals. “I am the only 4-H member to win Senior Fitting and Showmanship three years back to back at the Eastern States Exposition 4-H show,” she said.

She and her family competed with their Brown Swiss at state, regional and national levels across the country, while also being longstanding members of the New England and National Brown Swiss Associations.

In 2017, at World Dairy Expo, she showed the first place Brown Swiss spring calf, claiming first in Open, Junior and Best Bred and Owned. That led her to her family’s first Unanimous All-American. “One of my greatest achievements thus far has been to claim Junior Champion of the Junior Show in 2006, and also in 2018, which was my last year as a junior,” she said.

Biasini attended the University of New Hampshire, Thompson School Of Applied Science and earned an associate’s degree in Dairy Management and a Bachelor’s of Science degree in Sustainable Agriculture and Food Systems. “During my college career, I was fortunate enough to intern at Breitenmoser Family Farm in Merrill, Wisconsin, and after graduation I worked as a field scout for CaroVail Fertilizer in Salem, New York,” Biasini said.

Today, she is National Farmers dairy field representative for Vermont and New Hamphsire, which includes work as a Certified Milk Inspector for Eastern New York.

“I would like to say one of my biggest goals with National Farmers is focusing on having the best milk quality on all farms and to grow the number of farms in New England, and we are doing just that and more,” Biasini said. She still finds time to help with chores and crop work at her family farm.