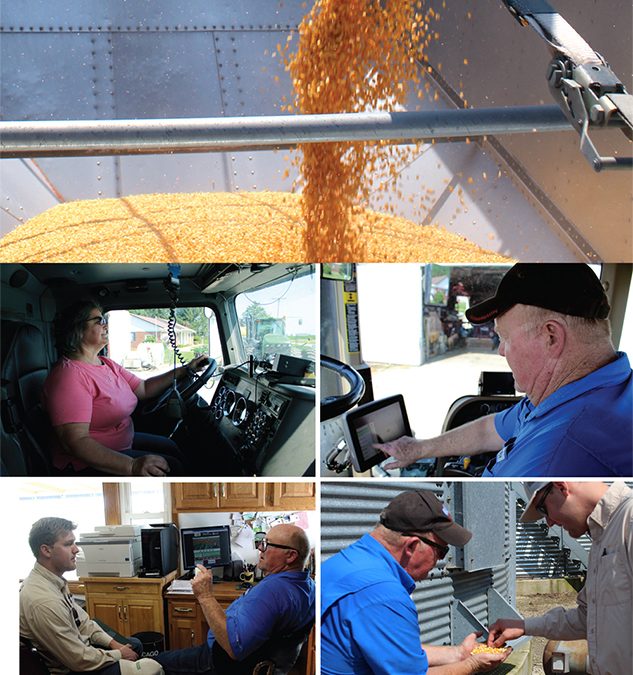 Steve and Karen Stremlau farm in north central Illinois, near Mendota, on land that’s ideal for growing the crops favored in America.

The land – four different rented farms and 400 acres – consists of similar soil types, with four or five in every field. “It’s good soil.…And I can see the city lights 12 to 15 miles away at night,” Steve says.

The land gradually rolls, and is dotted with waterways, ditches and creeks, giving the area a good drainage system, and tile works well in their part of north central Illinois. Steve plants two-thirds corn, one-third soybeans one year, and reverses it the next year, and has used that rotation for several years.

With his respect for the land in mind, Steve prioritizes growing methods for what works best and what preserves. He opts for strip-till and no-till practices, and strip tilling is a process he’s used for just a few seasons. “I like the economics of putting the fertilizer in the strip, reducing fertilizer use,” Steve says. “Plus, I like that it’s not on the ground, but injected in the ground, in the strip. I like that.”

The 2019 planting season could have provided a much better experience, though. “I thought it was a really good system until this year. With the rain, I wasn’t able to do my strip tilling until last fall, and doing it this spring became impossible. Every hour of the day, you had to commit to planting this year.”

And this year, Steve opted for no-till corn. The soybeans’ strip till became challenging. However, overall, strip till is a good method, Steve says. “I like the process of feeding the crop just what it needs. It may be more advantageous in the future, spoon feeding the crop as it grows.” And Steve says he appreciates the GPS on the strip-till unit.

Team Up for Results

The Stremlaus know it’s a team of people who make their farm work. Steve manages the operations side of the farm, ordering chemicals, seed and other farm necessities, handling the field work process and monitoring cashflow and expenditures. Karen works to keep the bookkeeping in tip-top shape, and they work together on the financials.

Steve and Karen talk about many farm decisions, such as what crop to plant, how to juggle multiple tasks and whether to invest in a new piece of equipment. Steve sets goals, plans and works with National Farmers’ Matt Brandyberry, Grain Marketing Plus representative, for the crop sales and risk management.

Steve and Karen work together with their lender, another trusted adviser. Steve handles hauling crops for deliveries on GMP contracts.

“Steve and I barter with two neighbors. We each have equipment essential to harvest, so we join forces to harvest for all three families,” Karen explains. “So we combine machinery and manpower.”

“So it becomes quite a team,” Steve says.

As for the off-farm endeavors, while Steve runs his own trucking operation, Karen works as office manager at a pole building business. The couple has four grown sons.

“I concentrate on forward contracting. I’ve been doing this with National Farmers for 30 years…” Steve says. He also uses futures options in correlation with Grain Marketing Plus.

“Seventy-five to 80 percent of the time, a forward contract is better than taking the cash market. That’s why I go into the upper scale in crop insurance also, so that protects us, so I can market 75 percent to 80 percent of my corn or grain in the futures market and feel safe doing that.”

Steve and his wife, Karen, farm together, both holding other full-time careers. Steve owns a trucking business, and Karen works for a pole building operation as office manager.

On the farm, Steve appreciates having a professional marketer. “I’ve made more from the marketer working the market for me than a lot of other things. And that’s where it really starts adding up,” he says. National Farmers says with Grain Marketing Plus, it puts producers’ prices in the top third of the market 80 percent of the time. “My experience has been that or better. On both corn and soybeans,” Steve says.

Through the unfolding situations in weather, markets and news events, Steve keeps talking with Matt Brandyberry, his GMP representative. “That’s a continuous relationship with Matt,” Steve says. “When talking with him, I have the National Farmers perspective, and I give him my perspective, then he tells me about the conference call.”

Experienced grain marketers talk every morning, discussing grain market activity and factors affecting them. “The markets are changing all the time, the extra minds and thoughts, I like that,” Steve says. He also appreciates the short-term and long-term outlook information.

Brandyberry is quick to credit Steve for his own keen eye on the markets, too. “Steve has the ability to sort through the mass of information and identify the most relevant to the price,” Brandyberry says.

Brandyberry and Steve talk about price goals, and Brandyberry works for the Stremlaus, when the Stremlaus are busy working on or off the farm. “I think that’s where the program has the biggest value for me. I can continue to truck and farm, and the marketing Matt can do.

“Matt can take advantage of the increased prices the market may offer,” Steve says, rather than simply the planned crop sales price level.

The Streamlaus’ grain handling system is a factor in determining marketing timing, as well. The pressure-cured drying system takes two to three weeks to dry corn, and Steve usually works with Brandyberry to set up marketing so it starts at December delivery, just to play it safe for dry time, and having enough corn harvested to fulfill contracts.

“Steve has given great thought to his grain production and handling,” Brandyberry says. “Because the crops meet moisture specifications, they get higher net cash prices received for each load delivered.”

Stremlau also uses the Producer Service Plan, which changed from being paid upfront each year, to pay-as-you-sell. “It simplified that process….That’s a big aspect to it being farmer-friendly. You can’t get any friendlier than that in my eyes,” Stremlau says.