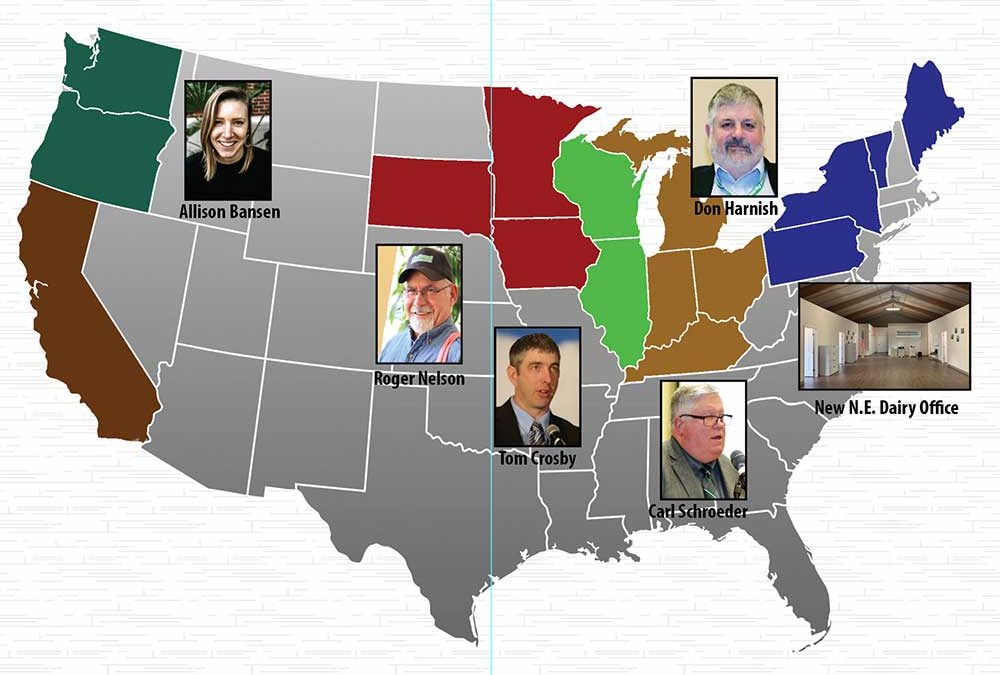 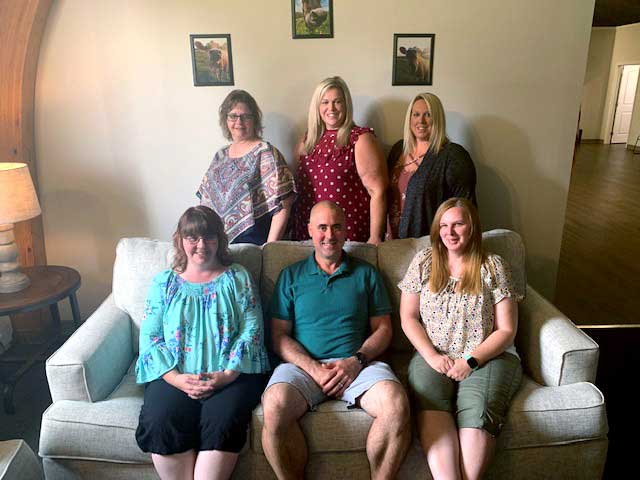 After outgrowing their facilities, they established a new headquarters in Cortland with office space to accommodate several more field staff and office members. Today, the Northeast supplies organic milk to six companies as well as working closely with Finger Lakes Cooperative in both conventional and organic markets.
For the past five years in the Northeast, extreme market conditions challenged the National Farmers staff.

Selling spot loads because of multiple plant closures meant Bylsma, Administrative Assistant Missie Chamberlain and Office Manager Kate Lucas have been working non-stop to help place all of the new member milk. They continually perform cold calls, communicating with existing customers and brainstorming all avenues to place the milk.

The office has grown from six staff members in 2016 to 13 today.

It’s not every day a National Farmers regional director has an opportunity to bring a new state into the dairy marketing family. But that’s just what happened 10 months ago for National Farmers Great Lakes region dairy head Carl Schroeder.

Schroeder was approached by two producers from the Elkton, Kentucky area asking if National Farmers was interested in marketing milk for a handful of dairymen in the Bluegrass State. 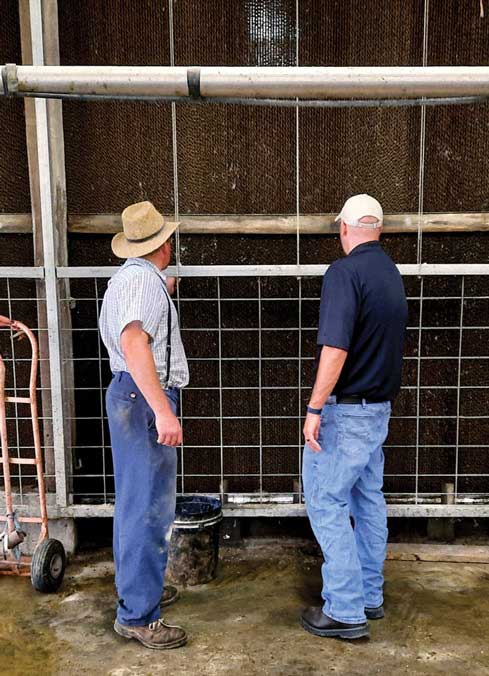 Schroeder met three separate times with a group of 15 producers, who were not satisfied with their milk marketer. Their former milk marketer had proposed a new contract for the group that mandated producers assume all liabilities for balancing seasonal milk demand. The discontented dairymen believed National Farmers’ milk marketing program was more suited for their needs. “In mid-October 2020, we moved a load of milk a day into a new market for us, said Schroeder. The load is comprised of 14 producers’ milk, 1,000,000 lbs. to 1,600,000 lbs. per month, depending on seasonality. Marketers are exploring other opportunities in Georgia to place milk. In the past nine months, the new members have given positive feedback about their new contract and National Farmers.

Andy Bousman is the dairy field representative for Kentucky. He says heat and humidity in that area of the country really impacts the cows and stresses them. Bousman and Schroeder are both working hard to service existing members and expand milk shippers in the infancy of the Kentucky milk marketing program. 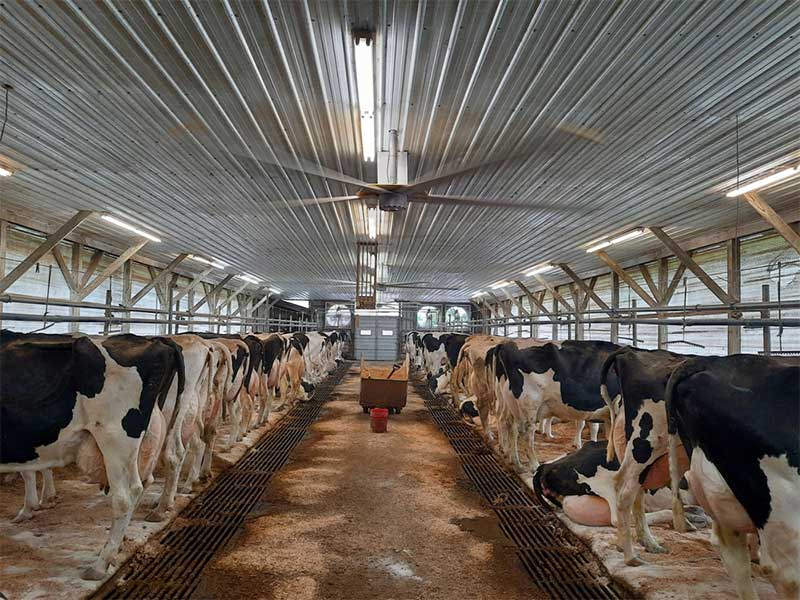 In 2019, the needs of dairy farms in north central Wisconsin intersected with National Farmers’ expertise in the dairy industry when producers searched out a new milk handler for the non-GMO milk they produce.

Of course, the process included pay price decisions. All National Farmers contracted milk has an over-order premium, but many milk, feed crop and transportation requirements, and associated costs, affect a farm producing for the non-GMO market. National Farmers and a non-GMO cheese processor, the buyer for this program, mutually agreed on a premium to help cover these additional costs for the family farms.

“Producers in this program are a little like certified organic producers in that they were already farming this way and they can be compensated for these practices,” Gracyk said. The non-GMO production style brings with it additional demands, such as the process of verifying a non-GMO farm, annual testing of feed inputs and third-party inspections.

Crosby explained the managed growth approach for this specialized dairy program. “Even in the area of Wisconsin where these farms are, we have to pace the addition of milk,” he said. “These dairy producers dairy with a passion, and they believe what they‘re doing is the right way to farm,” Crosby said.
A waiting list exists for this program already, Gracyk added. The participating farmers had been producing non-GMO milk for the previous market since 2017.

Riesgraf handles the non-GMO verification process for the dairy producers, who are now part of National Farmers. She said, “These farms and farmers are shipping top-quality milk, surpassing strict standards, and we’re pleased to work with them and provide a way to bring their milk to market.”

Crosby described the program launch needs like a four-piece puzzle. “It’s a partnership between farmers, the buyer and National Farmers, and the hauler, Bartnik Trucking and Transport, would be the fourth piece,” he said.

“An exciting new venture started for us on January 1, 2020, in the Upper Midwest Area, when we began doing field service work for Farmers All Natural Creamery based out of Kalona, Iowa,” said National Farmers milk marketing representative Marilyn Steffens.

The relationship started about four years ago when National Dairy Director Brad Rach, President Paul Olson, Upper Midwest Regional Coordinator Roger Nelson and Dave Kaseno, consultant met with Phil Forbes from Farmers-Creamery in Ames, Iowa. “At that time we were in the infancy of entertaining the idea of offering field service to their creamery,” Steffens said. 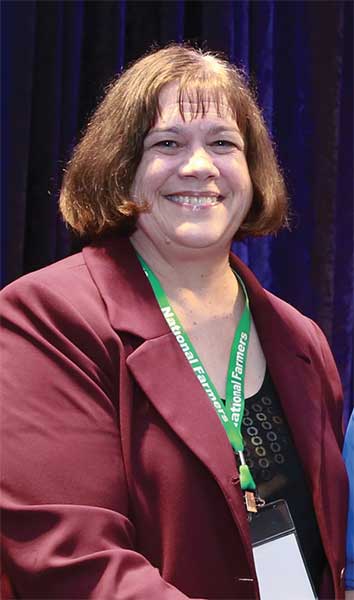 About two years after the first meeting, National Farmers began providing field service in the New York and Pennsylvania areas. Don Harnish, the regional director in that area, worked with Phil Forbes to establish a contract arrangement for services the organization would provide. Farmers Creamery officials said they were very happy with the service provided, which, brought them back to the Midwest to focus on Iowa and Missouri producers who needed on-farm contacts.

The majority of these patrons are Amish with one community of hand milkers. All of the FANC producers have been very receptive to National Farmers staff and work hard to produce high-quality milk for the creamery. At times, taking on that many farms can be challenging, because of the distance a field person has to travel, generally two to four hours before even arriving at the area needing service. During the last 18 months, National Farmers built trust, confidence and a good rapport, so producers are comfortable calling Steffens if they have a question or are seeking her advice.

Steffens is the main staff person visiting FANC farms, and Nelson helps when needed. Steffens had previously worked in these areas on dairy goat farms when she was employed by Montchevre, so she is familiar with the communities. It feels like going home to be back in the area, especially Kalona, she said. 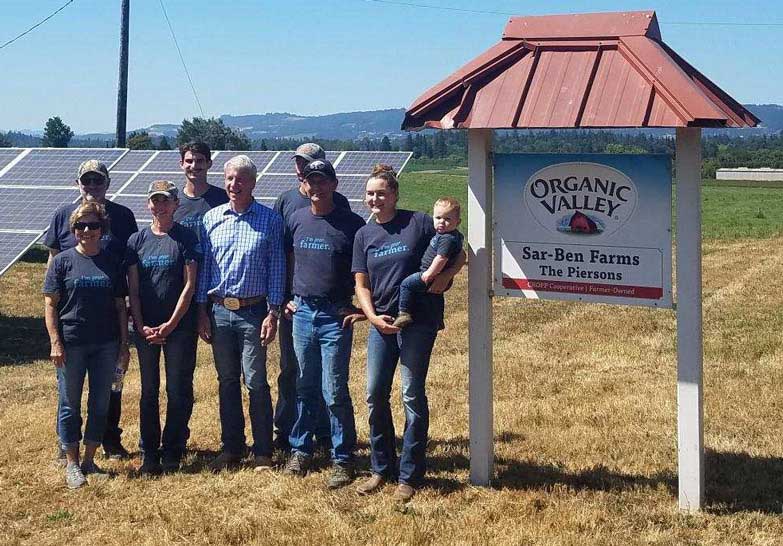 Steve and Susan Pierson, and their three kids, Kevin, Ryan and Sara, work and live on the operation. The Piersons’ Sar-Ben Farms is located about 30 miles south of Portland, Oregon in the Willamette Valley. Susan is a fourth generation farmer and their kids are the fifth. Sar-Ben milks 320 cows on 175 irrigated acres. They also own a 700-acre hay ranch in Central Oregon which allows them to be forage self-sufficient.

The farm became a grass-based dairy in 1997 and transitioned to organic production in 2005. Steve has had the privilege of serving on the Organic Valley board of directors for the past 10 years and is currently board president.

“We are very grateful to have had the opportunity to join National Farmers Organization in 2020,” Pierson said. “Having choices on how farmers choose to run their business is critical to their operations’ sustainability. Being part of NFO is a key component to making our farm a viable and sustainable option for our next generation and those that follow.”

Allison Bansen is the new Dairy Field Representative for Oregon and Washington state. Allison grew up on an organic dairy farm in the Willamette Valley. Prior to joining National Farmers, she worked for Organic Valley in their Farmer Support Program, Oregon Tilth in the inspections department.